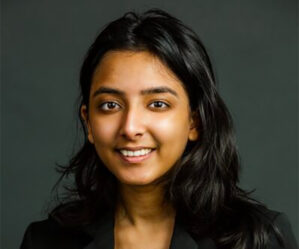 She moved from India to attend college in the U.S., graduated in 2020 with a dual major in economics and math from Grinnell College in Iowa, and landed a job at a global economic consulting firm in the heart of Manhattan. But something just wasn’t right.

As Jindal watched the upheaval of the coronavirus pandemic and the rising tensions around racial and social justice, she was compelled to do more. She wanted to use her analytical skills to help solve society’s most intractable problems and make the world a more equitable place.

“It was a nice job and it paid well, but I feel like it wasn’t the work I wanted to do,” Jindal, 22, said about her time in New York. “That year solidified that I want to purse academic research. I care about these issues.”

That drive led her to Wharton, where she applied and was accepted as one of the first pre-doctorate fellows to work at The Rodney L. White Center for Financial Research, which assists faculty and Ph.D. students in pursuing innovative research in financial economics.

The pre-doc program started last July with three fellows, and the center’s directors hope to add another three in the coming year. The program is open to recent graduates like Jindal who come from smaller colleges and want to pursue a doctorate degree. The fellows are not Wharton students; they are employees with competitive pay and benefits. Working for a year or two at Wharton bolsters their resumes, improving their chances of being accepted into a Ph.D. track at a top institution.

Wharton finance professor Itamar Drechsler, who is co-director of the center, said it’s particularly important to recruit graduates from underrepresented groups  into the fellows program to broaden the diversity of people entering the field.

“In finance, women and minorities are very underrepresented, but there is a high demand to hire them,” he said. “One of the priorities is to get people in on the ground floor, give them the training, and get them to the other side so that they can be hired. And I think this is a good launching point for that.”

Jindal said having Wharton on her resume will help open the door to a prestigious doctorate program, but that wasn’t the reason she applied. She was really attracted to the work.

“Experience is a little bit more important than just a name,” she said. “You can go to a really good school but not have formulated ideas about the kind of work that you want do, and that’s a disadvantage for somebody who goes to a small school.”

Jindal said she’s drawn to economics because she likes examining the world through that lens. “People have this misconception that it’s all about money, but it’s not,” she said. “It’s about allocating resources. I want to explore that.”

She’s been working closely with finance professors Sasha Indarte and Gideon Borstein. Indarte also believes that economists are well-suited to tackling social problems because their understanding of data enables a scientific approach. She recently released a study that reveals how racial bias in bankruptcy cases contributes to the widening wealth gap between Black and white Americans. In the study, Indarte and her co-authors found that Black bankruptcy filers are far more likely than whites to have Chapter 7 and Chapter 13 cases dismissed by the court.

Jindal has been working on this ongoing line of research with Indarte, who described her as a creative thinker, collaborative partner, and adept at picking apart data to find discrepancies and unusual patterns.

“She’s very determined and very dedicated to growing,” Indarte said. “If she makes a graph and I think it could be designed in a more informative way, she’ll take that feedback in stride, and the next graph she’ll send me is exactly what I’m looking for. She’s a quick learner and has a very positive mindset. I’ve never seen her discouraged.”